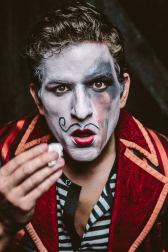 James as Ollie in Goodspeed's THE CIRCUS IN WINTER

Originally from Painesville, Ohio, James spent his childhood as an ice hockey goalie but soon found the Cleveland theatre scene and began acting.

He attended the Baldwin Wallace Conservatory of Music in Berea, Ohio and graduated in 2013 with a Bachelor of Music in Music Theatre.

James can also be found most nice days at Strawberry Fields in Central Park playing guitar for his fellow Beatle-fanatics.

When not performing, James pursues his life-long dream of going back in time and sailing on the Titanic.