- The unbelievable stories of the longest championship drought in sports history, the city it tortured, and the fans who cheered anyway - 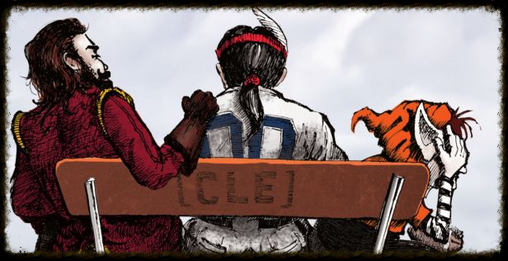 The number of professional sports seasons

Cleveland, Ohio waited for a championship.

We've all seen the replays, we've all heard the calls. Willie Mays' historic over-the-shoulder World Series catch, John Elway's famous AFC Championship-winning 98-yard drive, Michael Jordan's unforgettable series-winning buzzer-beater, LeBron James taking his talents to South Beach. These iconic moments and countless others have been watched, relived and loved by fans around the world since they were first etched into sports lore by history's greatest. But surprisingly, few sports fans realize each of these unbelievable moments have one thing in common:

For over a half-century, the professional sports teams on Lake Erie's southern shore either finished their season in last place or watched the title slowly slip through their fingers. "The Cleveland Curse" as it was known, not only kept the coveted major sports championships out of the hands of local teams but "The Catch," "The Drive," "The Shot," "The Decision," "The Fumble," "The Hit," "The Move" "Red Right 88," "Bottlegate," and many other "great" moments haunted its fans along the way.

Now, you may already be thinking, "My baseball team had it worse," "My football team hasn't been to the playoffs in years!" or, "My basketball team hasn't won a championship in almost a decade!" Well, while Moses Cle​​aveland would never purposely rain on your recent championship parade, the rest of the city would remind you that no single team's misfortunes could ever compare to the tragedy that was 52 years in Northeast Ohio. Of course, Chicago's lovable losers waited longer than any other team for a World Series win, 108 years to be exact. But keep in mind, in just the last 30 years of the Billy Goat's "curse," the city of Chicago enjoyed the Bears, the Blackhawks, the White Sox and The Bulls combining for eleven championships. Eleven.

Cleveland, on the other hand, had three, and at one time four professional sports teams and for 52 years, each club managed to fall on the wrong side of the final score, the wrong side of .500, and more often than not, the wrong side of history. Put plainly, the half-century Cleveland sports drought was bigger than one sport or one team, it was city-wide and for 145 collective seasons of losing, fans could only "wait for next year."

Until "next year" happened.

On June 19th 2016, or 51 years, 5 months and 24 days since the Cleveland Browns won the 1964 NFL Championship, the Cleveland Cavaliers ended the longest city-wide championship drought in sports history by defeating the Golden State Warriors, 93-89, in Game 7 of the 2016 NBA Finals. Though LeBron and company gave a fitting farewell to the "Cleveland Curse," the pictures, memories and souvenirs it left behind are like nothing else in the sporting world. In other words, the pain and suffering may have subsided but the history will always be there.

In an attempt to educate the non-Clevelander and entertain the life-long-Clevelander, this timeline documents the history of every professional sports team that called Cleveland home and every title, renaming and horrific mishap since "Forest City" threw their first pitch in 1865. If read in its entirety, you'll see why the Cavaliers championship parade of 1.3 million Clevelanders will be remembered far longer than a banner will hang in the rafters.

with the history of  THE INDIANS

* The beautiful painting above accompanied a Scene Magazine

*The amazing cover photo on the Conclusions page is by Brent M. Durken*

​*I know how to spell Cleveland, but the original spelling followed its founders spelling, with an extra "A."